Time synchronization for Windows 10 via TimeServer

If you need to successfully complete tasks which require per-minute or even per-second punctuality, you need to synchronize the system time on your computer with the time of the location where the remote server is located physically. Let\s see what it is done for, and also see the instruction on how to configure the system time synchronization feature in Windows 10.

Precise time on your computer

The basic task of any modern device, from a smartphone to a computer, is the counting of time. Without this fundamental feature, the computer can not perform any task in principle. The hardware and software components of the devices are based on first counting time, and only then performing the task assigned to them.

Local time on the computer is required only for the user. Regardless of whether the clock is slow or fast, the PC will perform most of the required tasks properly. However, when logging into the net, the user may encounter the problem of denying access to any network resource. Most search engines and social networks, not to mention specialized network services, can block the computer if its system time does not match the time of the region where it is physically located.

All these implies that not only the computer needs the precise time, but also the user, since without it he/she will not be able to perform the majority of tasks which require Internet connection.

Any operating system installed not into a computer or a mobile device has a built-in time synchronization feature. This feature performs a very simple task: it sends off a request to the time synchronization server, and then configures the system clock in accordance with the response received.

To transfer necessary data, the operating system uses a special network protocol NTP — "Network Time Protocol." This protocol takes into account the length of the delay between sending off a request to the server and receiving a response from it. Due to this principle of NTP work, even at low Internet speed, the user's computer will receive data on the precise time to the precision of no more than 10 milliseconds (1/100 second).

What is a time synchronization server?

Time synchronization server (or precise time server, NTP server) is a server which task is to generate and send off a data batch, which contains information about the current time of the region where the computer is physically located.

Immediately, a question arises: "Where does the NTP server itself get data about time in any given location?" It's very simple: the NTP server receives the necessary data from public services of the precise time or other sources. The latter, in turn, compare time counting with the real valid "Time Standards" — elaborate complexes consisting of many technical systems and time measuring devices.

Nowadays, there are numerous free NTP-servers. One of the most popular in Russia and in many other countries of the world is the precise time server TimeServer. The main advantages of the server include:

Here are the step-by-step instruction for configuring the time synchronization with the NTP server TimeServer.

Open the "Start" menu and click on the gearwheel icon. 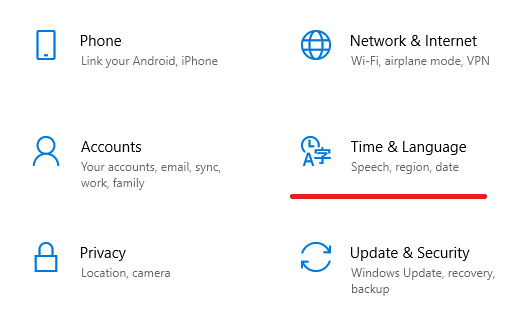 In the "Windows Settings" window that has opened, select the "Time and Language" section. 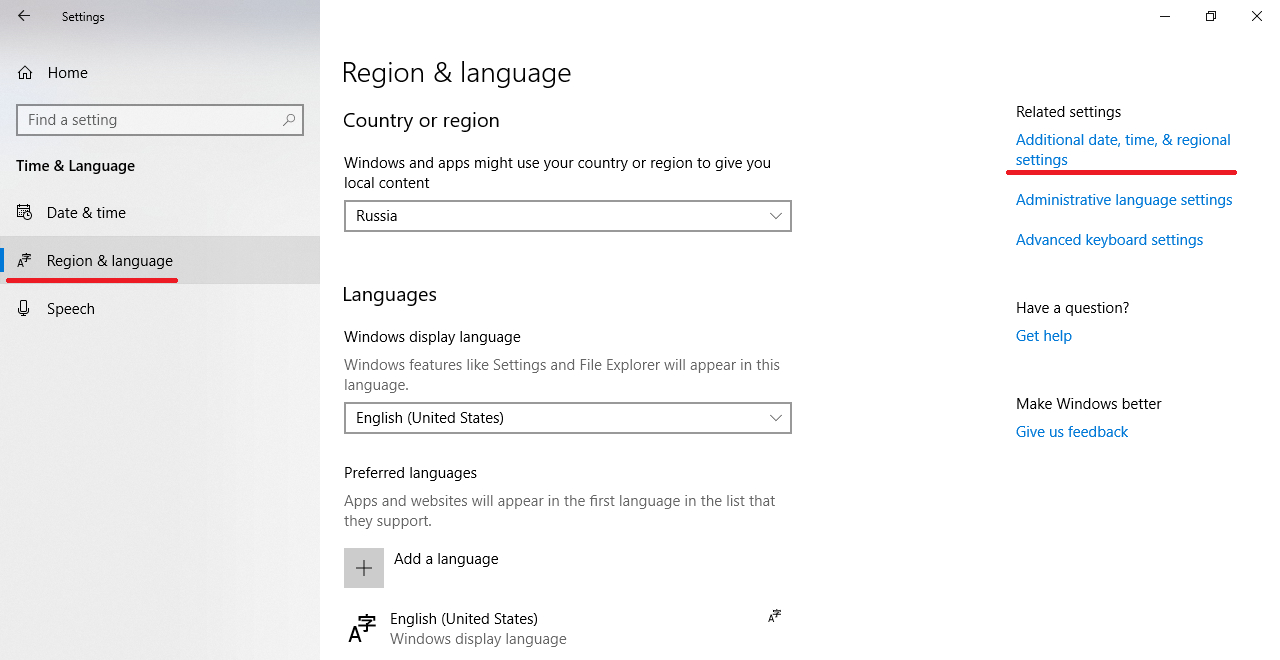 In the newly opened window, go to the "Region and Language" tab, and then to the section "Additional date and time settings, regional settings".

On the right side of the window, find the "Date and time Setting" subsection and open it. 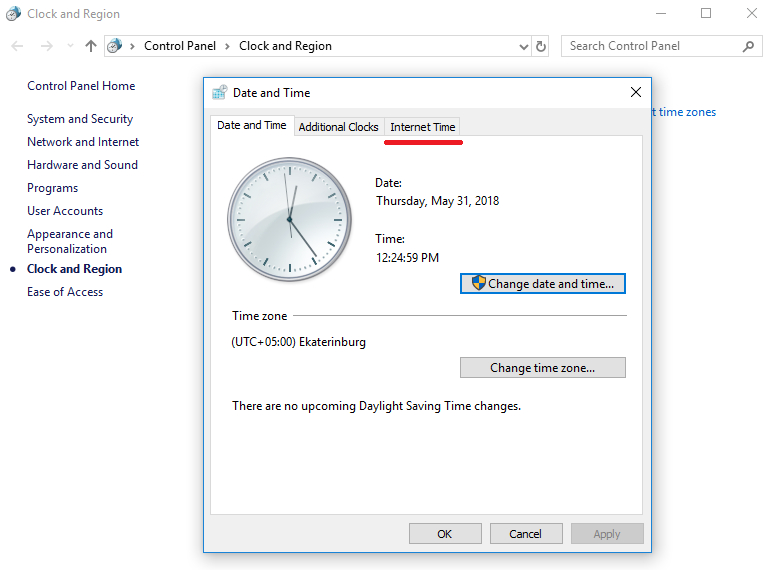 In the "Date and time" window, open the "Internet time" tab. 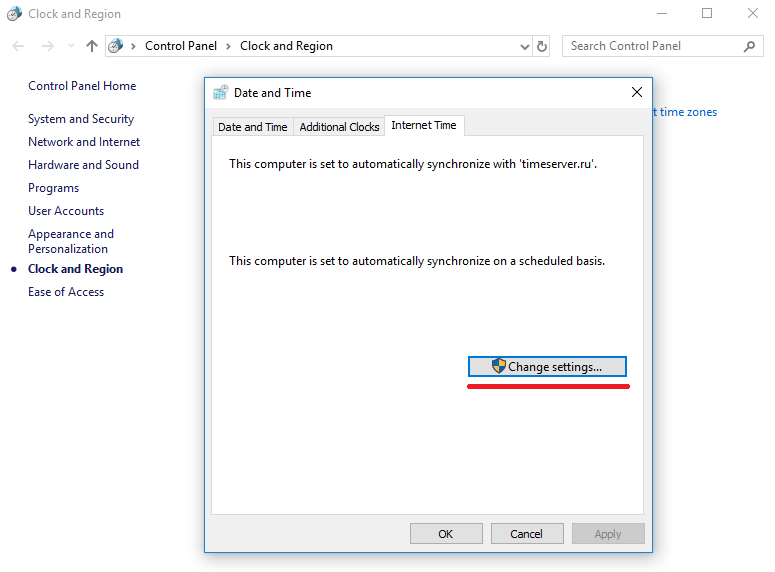 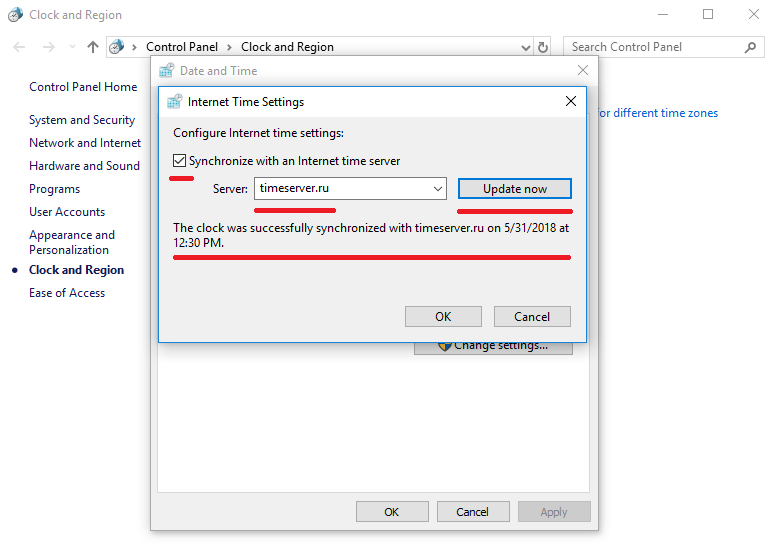 Please, make the following steps sequentially: check the "Synchronize with the time server on the Internet" box, then in the "Server" field enter the address of the X (without "www" and other elements) and click the "Update Now" button.

If everything is correct, you will see a message on the successful synchronization of time with the timeserver.ru.